The subject today is partnerships. I have been involved in 3 partnerships (Cyberworx.com, FindRentals.com, and Adoptme.com) over my 13 year Internet career, and none of them have ever worked out very well. I’ll start by talking about my Adoptme Toys partnership. In one of my previous postings I wrote about how I got my AdoptMe plush toy sold at Toys “R” Us. As I mentioned in that article, this was actually a partnership. For many years I had run the Adoptme.com website and made no money from it, so one of my business friends suggested we do a partnership where he would sell AdoptMe merchandise. I agreed, since I had no interested in doing anything that was not 100% virtual. The only condition I had was that no matter what happened with the toy company, I would still end up with the Adoptme.com website, so I had nothing to lose.

Our main product was the Adoptme Plush Toy, which allowed kids to play with the pets they adopt both online and offline. Inside each box was a personalized code that the buyer could redeem at on the Adoptme.com website to adopt an exact virtual version of their plush toy. 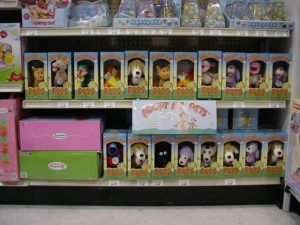 The product was great, and users loved it, but the main problem was it took us 3 years to get to the point where we were actually selling it. Over that 3 year period we spent a lot of money and effort getting the product to market, so by the time it was being sold in stores, we were out of money and needed to move on. Our only hope was for the product to be a smash hit, but it wasn’t. We sold a few a day from the Adoptme.com website, and it was sold a good amount in some stores (including Toys “R” Us), but it cost us $700/month just for product liability insurance, plus the cost of a small office in an office, plus the salary for a part-time employee, so it was not worth it for us to keep the company going unless we could get an investor. We tried that, but nothing ever came of it, so we shut the company down.

Another interesting issue that came up was that when we dealing with Toys “R” Us, if the toy was a success and had big sales, we did not have the money to fund the manufacturing costs for big orders that Toys “R” Us would give us. With the 2 month overseas shipping and then another 1-2 months to get paid from Toys”R” Us, we would have had to put up a lot of cash in advance for each order. Yes, we could have used a factoring company, but that would have taken away much of our profit.

Back to the issue of partnerships though. The problem I have had with all 3 parterships I have ever done is that they all end up taking much longer than expected to get going, and this creates the need for extra money to keep things running. Our biggest expense and delay with Adoptme Toys was that we paid $7000 to a manaufacturing broker to help us get the product manfactured cheaply overseas, and that was a total disaster. We did this because we had heard horror stories about dealing with overseas factories, so we though using an expert would be a good idea. But, the broker still hooked us up with a factory that ended up screwing us, so we wasted $7000 and 1 and 1/2 years because of this.

We then had to get started with a totally new factory in China, and it took 2 months just for them to ship us each order (by boat) and we started with a very small order just to make sure the toys came out ok, so by the time we made some changes and placed a larger order and received it almost a year had passed. Anyhow, all this extra time was eating up money, so my partner and I both had to put up more money or else the company would have gone out of business. I put around $37,000 total into this toy business, plus the $75,000 or so it cost me to originally develop the Adoptme.com website. I also for 2 years had one of my employees work almost full-time on the Adoptme Toys project, which hurt my company. When my partner eventually kicked in some extra money, we had this employee leave my company and work for Adoptme Toys.

Back when I started the partnership, I had considered things like this might happen, but I figured I would in the end get the Adoptme.com website back so it would not be a big problem. But, things never work out that simple. It was now 3 years later and my parnter had by now invested a lot of money in the business, so his goal was to try to sell the Adoptme Toys company, which included the Adoptme.com website, to try to recover some of the money we were both owed. The problem with this is that while we probably could have sold it for enough to pay us both back what we invested in the toy business, I would then lose the website which I had spent $75,000 to develop, so I would not get any of that investment back.

Luckily, my partner could not find a buyer easily, so I stepped in and offered $25,000 to buy the Adoptme.com website back. Since he really had no other options, he accepted. So, in addition to spending $37,000 in unplanned cash towards the partnership, I now had to spend another $25,000 just to get back the website which was originally mine and I was supposed to never lose.

In the end I did get a toy produced and sold in stores, and there was always a chance it could have been a big hit (like WebKinz is now many years later), so I don’t regret giving it a try. That is the nature of being an entrepreneur. Sometimes you win, sometimes you lose.

But, the Adoptme story does not end there. There was a surprising twist which I will write about later. It involves buyouts, Google, contracts, and lots of money.