As a domain investor, I have never been a big fan of new domain extensions (domains that are not .com, .net, or .org). They can be expensive, risky, and confusing. But, as a website developer, I understand there are times where it is beneficial to use one.  A year ago, I found myself looking for a domain for my artificial intelligence business, and all the good ones were already taken. I noticed that some companies in the industry were using .ai domains, so I decided that seemed like a good fit for what I was doing also. Because artificial intelligence is a cutting-edge technology, having a more modern domain extension projects an innovative image. And, more importantly, my first choice was available: impulse.ai (the name of my company is Impulse Communications).

It was actually harder than I thought it would be to register the domain. It turns out GoDaddy.com and the other popular registrars don’t offer .ai domains, so I Googled it and found only two companies that did. I choose 101domain.com because they were the least expensive ($80/year). Although this was much more than I wanted to spend, in the end it worked out fine, because I was going to pay a programmer to create a site for me but instead used the free website builder 101domain.com offered. In half an hour I had my site up and running for free at http://impulse.ai .

Back in the early 1990s, I signed up as a reseller of cellular phones (most people called them car phones back then because they were so big and were not practical to carry around). 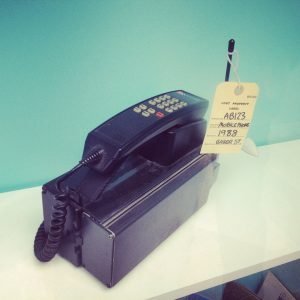 I would make $35 per activation, and I could give the phone away for free, as long as the customer signed up for service. Coverage was spotty though, and the rates were over $1/minute. People liked the general concept, but I never made any sales. The public did not really understand these phones, did not want to spend the money for them and were fine with just using phone booths instead. 50 years before that, a computer used to fill an entire room, but over time it had shrunk down to a desktop PC. In the same way, it was predictable that cell phones would eventually get smaller, better, and more popular.

The rise or fall of new domain extensions is not so predictable though. They fill a need in the market but are not any better than what was there before (.com). Much like when 888 and 877 phone numbers were introduced 20 years ago to compete with 1-800, the new domains mainly just offer the consumer more choices to alleviate the problem of a limited supply. It took many years for the alternate toll-free numbers to become accepted, and the new domains might follow this same trajectory. The difference though, as an investor, is that there are over 1,000 new domains, and it is very hard to know which ones will take off. The new domain industry as a whole might do fine, but it is a gamble trying to pick which ones will be the winners. And, with so many choices directly available to the consumer, the resale market for these domains is much more limited than the .com domain market is now.

Predicting the future is somewhat of a futile task. And, even if you do predict correctly, making money from your prediction is a whole different story. Maybe .com vs. the competition is just a small battle in a much bigger war. Maybe domain names will become unimportant 10 years from now, with everyone doing voice command searches on Siri, Google, and Amazon Echo. Maybe people will shift to using the next generation of apps or the next Facebook to find what they are looking for. People loved AOL and dial-up until something better came along. MySpace.com was cool until it wasn’t. Entrepreneurs who opened record stores, video rental stores and travel agencies obviously had no idea the end was soon coming. Even 5-10 years ago it was standard to have a home phone number and cable TV; now not so much.

I don’t think domains will become irrelevant anytime soon. If you are building a new website, it can’t hurt to have a killer domain. It gives instant credibility and is great for advertising purposes. And there is money to be made from buying and selling domains. But, there is also a new element of risk, in that the landscape of the domain market could eventually change, leaving you in the dust. So invest carefully and wisely, and keep an eye out for what may be coming next.

7 thoughts on “Why I Bought A .ai Domain Name”